About Windows Defender warnings with the latest release

In the latest release you might get a warning from Windows Defender that it "prevented an unrecognized app from starting".

If you do, click the "more info" link to continue. There is no security risk involved with installing File Juggler. 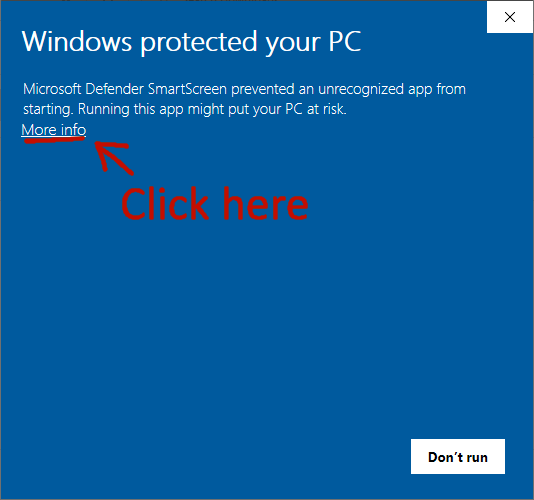 Why does this happen?

File juggler is digitally signed. This is to make sure that File Juggler comes from me / my company (bitvaerk), and not from someone else. To sign File Juggler i need a digital certificate that can only be purchased after a check that I am who I say I am.

For this release i've signed the application with a new certificate, as these need to be updated every few years. This causes Defender to mark the program as "unrecognized" because the certificate is new and defender hasn't seen it before. The certificate now needs to "gain reputation": each time someone download and installs the program it gains positive reputation and in time the warning will dissapear. I think this should happen in maybe a month.

My opinion on this subject is summed up very well (and more politely than I would have managed) by the Wikipedia page on smartscreen:

"Another criticism is that SmartScreen makes non-commercial/small end software development unaffordable. Developers either have to purchase standard code signing certificates or more expensive extended validation certificates. Extended validation certificates allow the developer to immediately establish reputation with SmartScreen but are often unaffordable for people developing software either for free or not for immediate profit. The standard code signing certicates however pose a "catch-22" for developers, since SmartScreen warnings make people reluctant to download software, as a consequence to get downloads requires first passing Smartscreen, passing SmartScreen requires getting reputation and getting reputation is dependent on downloads."

This update also have a few minor adjustments and bugfixes.

The keywords for this next update is consistency and communication. I don't plan to really add any new features, but instead to improve on the core functionality. This means:

I think this update will make File Juggler easier to work with, easier to understand and better suited for all kinds of professional use.

If work keeps progressing at the steady pace it is right now, I'll be able to release a beta in the fall.

Solves a problem where "file contents does not contain..." condition would not work.

You can run 1.3 and 2.0 at the same time, if you make sure they don't work in the same directory. This will of course use additional system resources.

A File Juggler license is valid for both versions, and you can use the same registration key.

A minor release, that solves a few bugs.

File Juggler 1.32 contains several bugfixes and improved stability. No new features, but I recommend upgrading, especially if you use "If file contains" with pdf files.

Beta 0.6 is the second beta release of File Juggler